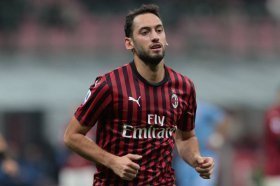 Chelsea attacker Hakim Ziyech has emerged as the top attacking target for AC Milan this summer.

Serie A giants AC Milan are looking to sign Olivier Giroud and Hakim Ziyech from Chelsea during the summer transfer window.

Chelsea are prepared to part ways with Hakim Ziyech during this summer's transfer window, football.london claims.

Arsenal have made contact with the agents of AC Milan attacker Hakan Calhanoglu over a free transfer.

Chelsea will need to increase their contract offer in order to convince Hakan Calhanoglu to join them on a free transfer.

Manchester United to miss out on AC Milan attacker?

Manchester United appear set to miss out on Hakan Calhanoglu with the attacker on the verge of signing a new contract with AC Milan.

AC Milan playmaker Hakan Calhanoglu is set to reject advances from Manchester United to sign a fresh long-term deal with the Serie A outfit.

Manchester United have reportedly decided against the prospect of signing Hakan Calhanoglu from AC Milan next summer.

Manchester United are prepared to double the wages of Hakan Calhanoglu as they seek to lure him on a free transfer at the end of the season.

Manchester United are exploring the possibility of signing Hakan Calhanoglu on a free transfer at the end of the season.

Arsenal to swoop for Turkish attacker on loan?