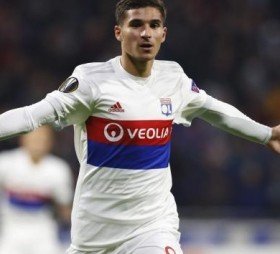 Juventus have been revealed their asking price for Brescia midfielder Sandro Tonali.

Juventus have decided to adjust one of their transfer targets for the summer to French midfielder Houssem Aouar after the club reportedly missed out on Man Utd player Paul Pogba. According to reports from Manchester, Pogba has been told that he will be staying at Old Trafford next season.

Chelsea are reportedly plotting a bid worth £43m for Lyon midfielder Houssem Aouar.

Liverpool have reportedly enquired over the possibility of signing Lyon midfielder Houssem Aouar when the transfer window reopens at the end of the campaign.

French-Algerian midfielder Houssem Aouar is considered one of Europe's best young attacking talents. The Lyon star's hero is fellow French-Algerian footballer Zinedine Zidane, and for many Aouar has modelled himself as a player on the French World Cup winning legend.

Lyon attacking midfielder Houssem Aouar has sensationally revealed that he turned down a move to Liverpool before deciding to stay in France and sign professional terms with his current club. Aouar has been a shining light in Ligue 1 so far this season and is expected to make the call up to France's full international side.

Premier League giants Liverpool could reportedly offer stiff competition to Manchester City in the race to sign Houssem Aouar from Ligue 1 side Lyon.

Manchester City have deployed scouts to monitor the progress of young French international midfielder Houssem Aouar. The Lyon starlet has burst into the first-team in this season's campaign and now the Cityzens are believed to be readying a move for the France under-21 international during the upcoming January transfer window.