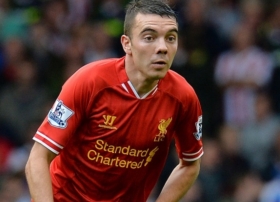 The Story Behind Barcelona's Disastrous Rejection of Luis Suárez
bill,” Celta Vigo’s Iago Aspas said this week, before facing his former Liverpool teammate, and watching him score two more. And yet the
20/02 08:30

Former Everton player, Leon Osman has hailed Morocco, describing them as 'excellent' after they played a 2-2 draw with Spain in their final group game of the ongoing FIFA World Cup in Russia.

Two goals from Cristiano Ronaldo and one each from Karim Benzema and Toni Kroos regained top spot for Los Blancos, and ensured they only need one point in their last game to clinch the title.

Middlesbrough to sign Iago Aspas at end of season?

I tuned in to watch England vs Spain at Wembley last night with very low expectations. After regular disappointments in recent major tournaments, coupled with the awfully boring and meaningless European and World Cup qualifiers against minnows such as Malta and Lithuania, it is no wonder that English international football has lost touch with the majority of the nation.

Sunderland are planning an audacious move for Celta Vigo striker Iago Aspas in the January transfer window. Aspas is one of Spain's in form forwards this season.

Liverpool's out-of-favour forward Iago Aspas could be heading back to his former club Celta Vigo at the end of the season, according to a report.

Southampton manager Ronald Koeman has reportedly been in contact with Liverpool regarding Spanish striker Iago Aspas. The forward is currently on loan at Sevilla.

Liverpool's out-of-favour forward Iago Aspas has agreed to join Sevilla on loan for the season.

Sevilla are apparently closing in on the signing of Liverpool's out of favour forward Iago Aspas.

Liverpool are ready to offer forward Iago Aspas to Sevilla in a bid to revive a deal for defender Alberto Moreno.

Liverpool forward Iago Aspas is to complete a transfer to La Liga side Sevilla. Aspas has found his first team opportunities limited under Brendan Rodgers' management last season and now has decided to return to Spain.

Liverpool boss Brendan Rodgers is reportedly set to have a major squad reshuffle this summer.

Spanish forward Iago Aspas has stated of his desire to stay at Liverpool next season.

Liverpool's out-of-favour striker Iago Aspas is preparing a move away from the Merseyside in the summer.

German club Bayer Leverkusen are ready to end Liverpool forward Iago Aspas' Anfield nightmare. The Spaniard is reportedly the top of their transfer wish list in the summer.

Iago Aspas could be on his way out of Liverpool on a temporary basis during the winter transfer window.

Iago Aspas could be set for a return move to Spain

Liverpool striker Iago Aspas is amongst a group of players that could be leaving Anfield in January, after a report indicated that Valencia have made a bid for the player.The striker has struggled to adapt to life in England and seems to be playing second fiddle to Luis Suarez since the Uruguayan's return from suspension.