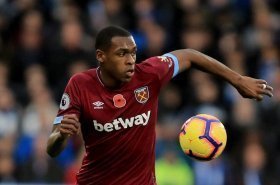 Fulham vs Everton LIVE: Frank Lampard picks an unchanged team from Crystal Palace hammering while Neeskens Kebano and Issa Diop come in for the hosts at Craven Cottage
Follow Sportsmail's live blog for the Premier League clash between Fulham and Everton.
29/10 16:25

Thilo Kehrer to move to West Ham from PSG?

West Ham have identified their primary target to replace the outbound Issa Diop, with Paris St Germain defender Thilo Kehrer the name mentioned as the Irons' new defensive partner to link up with Kurt Zouma in the Hammers' central defence. Kehrer has been told that he is free to leave PSG for a fee of around £16.5 million.

Issa Diop has completed a transfer to Fulham from West Ham, as the Irons reportedly prepare to wrap up a deal to sign the French defender's replacement. During a four year spell with the Irons, Diop played 121 times and was a crucial member of the first-team squad. The arrival of Kurt Zouma had left Diop's first-team opportunities somewhat limited though, and now he has decided to transfer to the Craven Cottage outfit in search of a starting XI berth.

Arsenal flop on his way to Fulham?

Former Arsenal and Chelsea winger Willian could make a swift return to the Premier League with Fulham this summer.

Manchester United are reportedly one of the clubs in the running to sign Issa Diop from West Ham United this summer.

Arsenal could reportedly seek to land the services of defender Issa Diop from West Ham United when the transfer window reopens in a few months' time.

Manchester United are reportedly prepared to go head-to-head with Chelsea in the race to sign defender Issa Diop from West Ham United this month.

Chelsea are reportedly plotting a transfer approach for defender Issa Diop from West Ham United as they seek to strengthen their options at the heart of the defence.

Arsenal are understood to have made an enquiry to sign West Ham United defender Issa Diop during the ongoing summer transfer window.