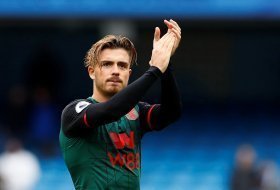 Jack Grealish pays tribute to Man City fan Finlay as he wears t-shirt ...
... he was later offered the chance to meet Grealish in person as part of the Premier League's 'Fan Mail' initiative. During their meeting, the ...
05/12 19:01

Manchester City have no plans of parting ways with Raheem Sterling in January amid interest from Barcelona and Arsenal.

Manchester City attacker Raheem Sterling is keen on leaving the club when the transfer window reopens in January.

Napoli striker Victor Osimhen has emerged as a top transfer target for Manchester City to bolster the centre-forward department.

Pep Guardiola wanted Arsenal target to leave over the summer

Arsenal have been handed an injury boost ahead of the Premier League clash against Aston Villa tomorrow.

Manchester City have no desire to part ways with Raheem Sterling during the January transfer window, according to The Sun.

Arsenal have reportedly been linked with a surprise move for Manchester City winger Raheem Sterling.