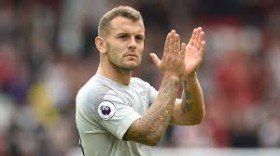 Who is Sergej Milinkovic-Savic? The 'next Pogba' linked with £60m Arsenal transfer
. READ NEXT: Full Arsenal Premier League fixture list for 2022/23 Arsenal behind the scenes: Lisandro Martinez transfer, Jack Wilshere
04/07 14:20

Former Arsenal and England international midfielder Jack Wilshere is ready to make a return to football action on a permanent basis, having trained with the Gunners for the last two months. So far, no offer has been made by Mikel Arteta's side, but rumours continue to suggest Arsenal will table a short term offer shortly.

Former Arsenal star Jack Wilshere has said that he has been left bemused by the fact that Mesut Ozil was left out of the 25-man Premier League squad.

West Ham has been dealt yet another blow after a terrible 1-0 defeat to Tottenham this past weekend, after hearing that striker Andriy Yarmolenko will be out of action for six months. The Ukrainian forward, who joined from Borussia Dortmund in a mega-money deal last summer, will be left on the sidelines for the foreseeable future after being stretchered off at half-time against Spurs on Saturday.

Liverpool and Manchester United are reportedly considering moves for Arsenal midfielder Aaron Ramsey when the transfer window reopens in January.

Former Arsenal midfielder Jack Wilshere has suffered a fresh injury blow with West Ham United after sustaining an ankle problem which has required an operation.