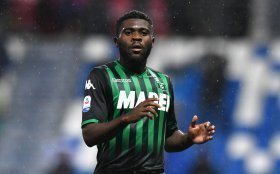 Video: Former Chelsea talent Jeremie Boga punishes current loanee Zappacosta who's caught out of position for Genoa
Jeremie Boga who is now doing great things in Serie A after leaving Stamford Bridge, and he punished the lack of cover at the back with some
06/01 16:40

Chelsea have decided against triggering the £13m buy-back clause in the contract of Sassuolo winger Jeremie Boga, a report from The Guardian claims.

Chelsea have reportedly decided against triggering the buy-back clause in the contract of Jeremie Boga, who is currently at Sassuolo.

Chelsea are reportedly planning to trigger the buy-back option on the contract of former winger Jeremie Boga, who is currently with Sassuolo.

Ivorian winger Jeremie Boga has opened the door to rejoin Chelsea when the transfer window reopens at the end of the campaign.

Chelsea boss Frank Lampard is reportedly considering the option of re-signing Jeremie Boga from Serie A side Sassuolo.

Tottenham Hotspur have reportedly joined Chelsea in the race to sign Jeremie Boga, who has impressed with Sassuolo in the Serie A.

Chelsea are reportedly planning to open discussions with Sassuolo as they seek to re-sign former graduate Jeremie Boga.

Manchester United are reportedly leading the likes of Liverpool and Chelsea in the race to sign Jadon Sancho from Borussia Dortmund in the summer.

Chelsea are understood to have reached a verbal agreement with Ajax to sign Hakim Ziyech during the summer transfer window.

Chelsea plan to re-sign former winger from Serie A club

Chelsea are reportedly looking at the possibility of re-signing Jeremie Boga from Sassuolo when the transfer window reopens at the end of the campaign.

Jeremie Boga is a French attacking midfielder who currently plays for Chelsea under-21s. Boga joined Chelsea as an under 12 player and has since developed into an accomplished midfielder. Although, he has only recently just turned 18, Boga is already beginning to look like a quality player. He has represented France at under-16, under-17 and under 19 levels.

Championship outfit Bolton Wanderers are keen on signing 16-year-old Jeremie Boga from Chelsea on a season-long loan deal, according to The People. The Blues starlet has been training with the Chelsea senior squad since pre-season, but he is believed to not feature in manager's Jose Mourinho squad sheet as of now.