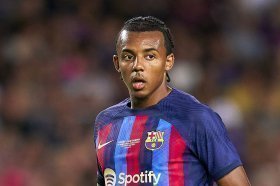 Barcelona: Julien Laurens criticises Jules Kounde after poor performances
... finishing third in their Champions League group, with their huge summer transfer window not paying off so far. Speaking to TalkSport , ...
07/12 18:35

Barcelona are reportedly aiming to beat Chelsea to the services of AC Milan attacker Rafael Leao.

Barcelona to beat Chelsea to another defender?

Chelsea are set to face stiff competition from Barcelona in the race to sign RB Leipzig defender Josko Gvardiol next summer.

Jules Kounde reveals why he chose Chelsea over Barcelona

French defender Jules Kounde has revealed that he was convinced to join Barcelona over Chelsea after speaking with manager Xavi Hernandez.

Chelsea have made a final transfer offer of €20m to sign Barcelona striker Pierre-Emerick Aubameyang this summer.

Chelsea will need to pay between £80-85m to sign Leicester City defender Wesley Fofana this summer.

Chelsea have been fancied to make an approach for Bayern Munich defender Benjamin Pavard, according to Christian Falk.

Paris Saint-Germain defender Presnel Kimpembe has decided to stay put at the club amid interest from Chelsea.

Barcelona have beaten Chelsea to the signing of Sevilla defender Jules Kounde this summer, according to Fabrizio Romano.