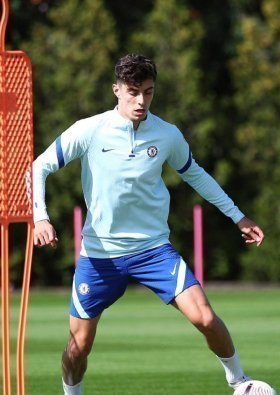 The big problem Frank Lampard has with Hakim Ziyech and Kai Havertz at Chelsea
' of Premier League football. Chelsea made the decision to add both Ziyech and Havertz to their ranks over the course of the summer transfer
24/10 13:30

Chelsea will be aiming to return to winning ways when they face Manchester United at Old Trafford this afternoon. The Blues have played back-to-back draws since returning from the international break.

Sevilla manager Julen Lopetegui has said that Chelsea could be one of the favourites to lift the Champions League title this season.

Chelsea manager Frank Lampard has heaped praise on Timo Werner following his brace in the 3-3 Premier League draw against Southampton.

Chelsea reportedly failed with an attempt to sign Lautaro Martinez from Inter Milan during the recent international transfer window.

Chelsea are reportedly monitoring the contract situation of Paulo Dybala and could make an approach for him in the future.

Despite the fact that the stadiums are empty, the matchday revenues are down and the uncertainty of the post-lockdown world continues to dominate the 2020-21 Premier League campaign, the summer transfer window is once again well on its way to smashing all manner of records with some of the most mouth-watering fees ever seen in the game.

Chelsea are expected to announce the signing of goalkeeper Edouard Mendy next week, reputed journalist Fabrizio Romano has revealed.

West Ham United midfielder Declan Rice could reportedly push through his move to Chelsea during the final weeks of the summer transfer window.

Bayern Munich have reportedly revived their interest in signing Callum Hudson-Odoi from Chelsea this summer.

West Ham United have no plans of selling midfielder Declan Rice this summer irrespective of the offer on the table from Chelsea.

Chelsea manager Frank Lampard has stressed that he has no plans of parting ways with N'Golo Kante this summer.

Chelsea winger Callum Hudson-Odoi could be loaned out for the season following the arrivals of Hakim Ziyech, Timo Werner and Kai Havertz this summer.

Chelsea have reportedly reached an agreement to sign goalkeeper Edouard Mendy from Rennes.

France international Olivier Giroud has no plans of leaving Chelsea despite the interest from Juventus.

Chelsea manager Frank Lampard has confirmed that Christian Pulisic and Cesar Azpilicueta are available for selection for the Premier League opener at Brighton & Hove Albion on Monday.

Chelsea have reportedly been offered the opportunity to sign Ajax goalkeeper Andre Onana during the ongoing transfer window.

Chelsea have reportedly entered into concrete negotiations with Rennes over a potential deal for goalkeeper Edouard Mendy.

Darren Bent believes Chelsea are capable of finishing above Liverpool in the Premier League after their summer spending.