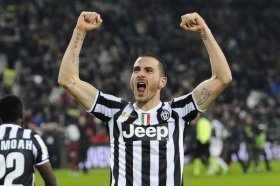 ALVISE CAGNAZZO: Lozano can make the difference for leaders Napoli, Italy's future is in safe hands with Cremonese star Carnesecchi and Juventus veteran Leonardo Bonucci is running out of steam... 10 THINGS WE LEARNED FROM SERIE A in midweek

The new owner of the London club, Todd Boehly, is ready to fund a move for Matthijs de Ligt if Thomas Tuchel decides that he wants him.

Juventus to move for Liverpool star before deadline

Juventus are reported to be eyeing a late move for Liverpool defender Dejan Lovren following a long-term injury to Giorgio Chiellini.

Manchester United are weighing up an approach for Juventus defender Daniele Rugani amid their frustration over the prolonged negotiations to sign Harry Maguire.

Arsenal are reportedly considering a move for Juventus defender Daniele Rugani as they seek to strengthen the heart of the backline.

Manchester City have reportedly made initial contact with Barcelona regarding the availability of French defender Samuel Umtiti.

Manchester City are reportedly planning an approach to sign Leonardo Bonucci from Juventus during this summer's transfer window.