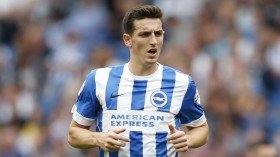 Chelsea have not made any bid for Premier League defender

Chelsea have not made any bid for Brighton & Hove Albion defender Lewis Dunk, a report from TalkSPORT claims.

Chelsea are reportedly close to securing the signature of Lewis Dunk from Brighton & Hove Albion.

Chelsea have reportedly been told by Brighton & Hove Albion that they will need to come up with a package of around £50m in order to sign Lewis Dunk during the current transfer window.

Adam Webster yesterday completed a transfer move from Bristol City to Brighton and Hove Albion in a deal worth £20 million. The 24-year-old defender arrives at the club on a four-year deal and is expected to play an important part of Brighton's squad for the upcoming Premier League season.

Leicester City have approached Brighton and Hove Albion regarding a transfer move for impressive centre back Lewis Dunk. The player, who has been linked with a move to the Foxes as a potential replacement for Man Utd bound Harry Maguire, has 1 cap for England and is hopeful a transfer elsewhere will boost his own international prospects.

Manchester United have reportedly been told that they must pay a fee of around £85m to secure the signature of Harry Maguire from Leicester City.

Manchester United are reportedly weighing an approach to sign Brighton & Hove Albion centre-back Lewis Dunk at the turn of the year.

Arsenal's terrible week continued on Sunday when they were beaten in their Premier League clash with Brighton and Hove Albion, their fourth consecutive defeat in all competitions and leaving Champions League football next season looking ever more unlikely.