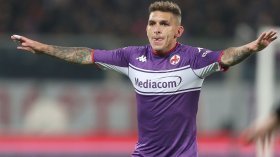 OUT OF LUC Lucas Torreira reveals he has ‘NO chance’ of staying at Arsenal and wants summer transfer away after Fiorentina loan
. “Then I had a very good season and I have one year left on my contract with Arsenal. “Any team that wants me has to buy me, which would be
29/06 14:57

Arsenal midfielder Lucas Torreira will return to the club this summer after his proposed move to Fiorentina collapsed.

Arsenal are set to receive a £13m fee from Fiorentina for the permanent transfer of Lucas Torreira this summer.

Arsenal manager Mikel Arteta and his technical director of football, Edu, have earmarked Leicester City midfielder Youri Tielemans as their number one transfer target once the summer window opens. Tielemans, who has had successful spells with Monaco and his boyhood club Anderlecht, could be allowed to leave the Foxes for a transfer fee in the region of £50 million.

Arsenal midfielder Lucas Torreira has agreed terms with Fiorentina ahead of his permanent move this summer, Football Insider claims.

Arsenal are considering the possibility of landing Hoffenheim midfielder Florian Grillitsch on a free transfer this summer, The Telegraph reports.

Fiorentina striker Dusan Vlahovic is reportedly considering a move to Arsenal before the end of the month.

Arsenal have reportedly made a formal approach to sign Fiorentina striker Dusan Vlahovic this month.

Arsenal have reportedly made an approach to sign Fiorentina striker Dusan Vlahovic this month.

Fiorentina are prepared to hold fresh talks with Arsenal over a permanent deal for Lucas Torreira.