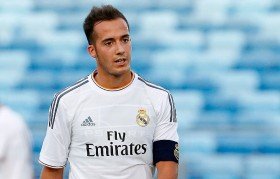 Chelsea and Manchester United are among the clubs interested in signing Lucas Vazquez whose contract with Real Madrid expires in June.

Manchester United are looking into a potential move for Lucas Vazquez, a report from Fichajes claims.

Chelsea have received a boost in signing Lucas Vazquez from Real Madrid with the Spaniard admitting that he could consider a move to the Premier League.

Chelsea have been fancied to make an approach for Lucas Vazquez, whose contract with Real Madrid expires at the end of next season.

Real Madrid manager Zinedine Zidane has hinted that his side could yet finalise a deal for Manchester United midfielder Paul Pogba this summer.

Paul Pogba is reportedly eager to seal the move to Real Madrid because he is keen on working under the guidance of Zinedine Zidane.

Arsenal are reportedly deemed to have won the race to secure the signature of Dani Ceballos on a temporary basis from Real Madrid this summer.

Real Madrid could reportedly end their interest in signing Manchester United midfielder Paul Pogba as they are unlikely to meet the Red Devils' asking price for the Frenchman.

Arsenal have reportedly emerged as the favourites to secure the signature of midfielder Dani Ceballos from Real Madrid this summer.