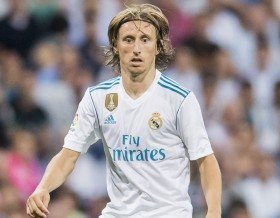 Real Madrid are keeping tabs on Paul Pogba's contract situation with a view to a potential transfer next summer, Marca reports.

Real Madrid won't entertain the permanent departure of Martin Odegaard, who is currently on loan with Arsenal.

Real Madrid midfielder Luka Modric has ruled out the prospect of returning to Tottenham Hotspur by stating that he is 'too old' to consider a comeback.

Manchester United are reportedly prepared to trigger the extension clause in Paul Pogba's contract in order to preserve his value ahead of the summer transfer window.

Real Madrid are reportedly prepared to make a renewed attempt to sign midfielder Paul Pogba from Manchester United this summer.

Barcelona are required to splash out €90m for Inter Milan defender Milan Skriniar, should they want to sign him in the summer.

Real Madrid star Luka Modric could make way for Inter centre-back Milan Skriniar in a swap deal in the summer.

According to Daily Mail, Real Madrid have agreed a deal worth £47m for Ajax star Donny van de Beek.

Arsenal's hopes of signing Dani Ceballos on a permanent basis have taken a dent with Real Madrid planning to use his services during the 2020/21 season.

Real Madrid manager Zinedine Zidane has refused to rule out a move for Paris Saint-Germain attacker Neymar before the close of the summer transfer window.

According to certain reports from Italy, Real Madrid are all set to land a mega bid for Napoli's center back Kalidou Koulibaly this summer.

Real Madrid manager Zinedine Zidane has confidently told reporters that he would like to make a move for French international midfielder Paul Pogba at some point in the future. Real are set for a summer of rebuilding under Zidane and are expected to make moves for some of Europe's best transfer talent with a budget of over 400 million euros.

In less than 48 hours of Zinadine Zidane’s sensational appointment as a Real Madrid coach, reports have been doing grounds about the €300 million transfer kitty being handed by Florentino Perez to Zidane. Zidane has some of the best footballers on his wish list. Ranging from Neymar to Eden Hazard, the wish list is star studded.

Real Madrid and Croatia star Luka Modric has been crowned the Ballon d'Or winner for 2018, thereby ending the decade-long dominance from Cristiano Ronaldo and Lionel Messi.