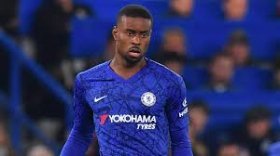 Arsenal set 18-year Liverpool and Manchester City challenge as Mikel Arteta finds key edge
at Selhurst Park on the season's opening day only increased the Emirates' expectations. An own goal from Marc Guehi added to Gabriel
07/08 16:00

Crystal Palace have confirmed the signing of Conor Gallagher on a season-long loan agreement.

Crystal Palace have signed Marc Guehi from Chelsea for a reported fee of around £18 million.

Chelsea defender Marc Guehi could be handed the chance to impress in the Premier League next season, The Athletic claims.

Chelsea are at Stamford Bridge for the League Cup fourth round tie against Manchester United tonight.

Chelsea have reportedly received a fresh injury concern with Andreas Christensen sustaining a groin problem on international duty with Denmark.