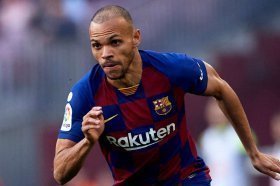 Leeds United transfer rumours: Martin Braithwaite bid, Marcelo Bielsa's message to Victor Orta
of the Premier League season. With the January transfer window now in the rear-view mirror, here is a round-up of the latest transfer
04/02 06:00

Barcelona have been offered the opportunity to sign Arsenal striker Alexandre Lacazette, a report from Calciomercato claims.

West Ham United and Everton could reportedly compete for the services of Martin Braithwaite when the transfer window reopens at the end of the season.

Barcelona are reportedly interested in Leganes striker Martin Braithwaite as they are allowed to make an emergency signing following the injury to Ousmane Dembele.

Championship big-spenders Wolverhampton Wanderers are planning an attempt to sign Patrick Bamford after they missed out on his services to Middlesbrough last winter.

Championship side Middlesbrough have sealed the services of Ashley Fletcher from West Ham United on a four-year deal. The former Manchester United graduate managed 354 minutes of top-flight football under Slaven Bilic last season.

Championship club Middlesbrough have announced the signing of striker Britt Assombalonga from Nottingham Forest for a club-record fee, reported to be around £14m.