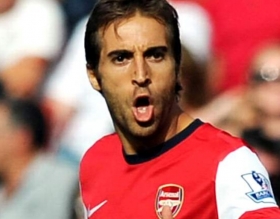 Crystal Palace have acquired the services of former Arsenal midfielder on a free transfer. The Frenchman was on the search for a fresh club after he was released from the Emirates last term.

Mathieu Flamini is having a series of medical tests with Crystal Palace ahead of his Bosman move to the club. The midfielder is out-of-contract after he was released from Arsenal at the end of the previous campaign.

Crystal Palace are considering a contract offer for former Arsenal midfielder Mathieu Flamini. The Frenchman is currently a free agent after he was released from the Gunners in June.

The 22-year-old former Manchester City trainee is wanted by Spurs boss Mauricio Pochettino after glowing reports from head of recruitment Paul Mitchell, who has been tracking the attacking midfielder all season.

Arsenal are planning a move for Empoli midfielder Riccardo Saponara. Italian champions Juventus have also been credited with interest for the 24-year-old midfielder.

Newly-promoted Middlesbrough are eager to make a move for Mathieu Flamini whose contract runs out at Arsenal in the summer. The Frenchman is expected to follow the likes of Mikel Arteta and Tomas Rosicky through the Emirates exit door next month.

Arsenal are reported to be weighing up a bid for Leicester City midfielder N'Golo Kante. The Gunners are in the market for a new enforcer with the likes of Mikel Arteta, Mathieu Flamini and Tomas Rosicky set to leave the Emirates in the summer.

Arsenal have had another check on Porto midfielder Danilo Pereira, Portuguese outlet O Jogo claims. The Gunners were linked with a move for the 24-year-old in January, but a deal never materialised.

Arsenal are monitoring the performances of Porto midfielder Danilo Pereira ahead of a summer move for his signature. The 24-year-old had been linked with a potential switch to the Emirates in January, but a deal never materialised.

French midfielder Mathieu Flamini could be heading to Major League Soccer once his contract expires at Arsenal in the summer.

Mathieu Flamini is expected to leave Arsenal at the end of his contract, according to reports.

Arsenal boss Arsene Wenger is said to be eyeing a surprise move for Manchester United midfielder Michael Carrick in the summer.

Arsenal will reportedly seek to bring in a new defensive midfielder in the winter transfer window.

Arsenal's star midfielder Francis Coquelin is expected to be out for a lengthy spell after he suffered a knee ligament damage.

Arsenal not keen on Grzegorz Krychowiak

Arsenal will not pursue a summer move for Sevilla midfielder Grzegorz Krychowiak, according to reports.

Arsenal midfielder Mathieu Flamini has been told to find himself a new club during the transfer window.