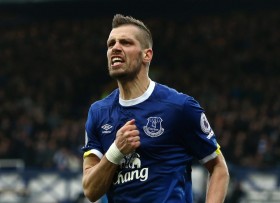 Morgan Schneiderlin admits regret over leaving Manchester United for Everton after Jose Mourinho chat
-midfield problem after the Frenchman had shone for three seasons in the Premier League at Southampton. While he was never able to reach
20/02 20:40

The stunning manner in which Manchester City tore Southampton to shreds at the weekend certainly had fans of the champions chirping. Rightly so, Pep Guardiola’s men were on fire. In this form, there are few teams in world football who can live with City.

West Ham United are reportedly plotting a late attempt to sign Morgan Schneiderlin from league rivals Everton. The Hammers are actively pursuing a new central midfielder after missing out on both Jonjo Shelvey and Joe Allen.

England international Tom Cleverley is just a game away from sealing a permanent move to Watford.

Lukaku scores again as Everton move in on top five

Everton beat West Brom at Goodison Park on Saturday afternoon, as they moved to within three points of the Premier League's top five, giving them the chance to qualify for next season's Europa League.

Manchester United boss Jose Mourinho is reported to be lining up a &pound30m approach for Arsenal's Alex Oxlade-Chamberlain.

Manchester United manager Jose Mourinho has insisted that Bastian Schweinsteiger will not be leaving the club ahead of this week's transfer deadline.

Manchester United are reportedly considering a deal for Benfica's Victor Lindelof following the sales of Memphis Depay and Morgan Schneiderlin.

Manchester United are reportedly planning to offload Luke Shaw at the end of the season, Jose Mourinho does not see the full-back in his plans for the future.

Everton have stalled on a deal for Standard Liege's Ishak Belfodil due to financial complications.

Premier League giants Liverpool are not keen on signing Southampton defender Jose Fonte this month. The Portugal international has recently handed in a transfer request at St.Mary's.