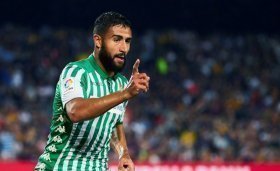 Arsenal could renew their long-term interest in Nabil Fekir this summer as they seek to find a replacement for Daniel Ceballos.

Arsenal are understood to have retained their long-term interest in Nabil Fekir, who is currently with Real Betis in the Spanish La Liga.

Arsenal are reportedly in contact with Real Betis regarding a summer move for Nabil Fekir.

Arsenal are understood to have revived their interest in signing Real Betis' Nabil Fekir ahead of the summer transfer window.

Tottenham have received a blow in their efforts to sign Real Betis midfielder Giovani Lo Celso this summer, after receiving word that Atletico Madrid have entered the race to sign the Argentinian. Lo Celso is considered one of Europe's brightest young prospects and Atletico are ready to pay 75 million euros to acquire the player.

Nabil Fekir has flown in to Spain today to discuss his proposed transfer to La Liga side Real Betis. The Lyon attacker, who has been linked with transfers to Liverpool and Barcelona in recent seasons, will depart Lyon for Betis in a 30 million euro transfer switch.

Spanish club Real Betis are on the verge of announcing a huge transfer deal to sign French international forward Nabil Fekir. The player, who has been constantly linked with a move to Liverpool in recent seasons, will transfer to the La Liga side in a deal worth up to 45 million euros.

Arsenal won't be able to sign Nabil Fekir this summer

Arsenal are unlikely to afford the signing of Lyon midfielder Nabil Fekir this summer due to the hefty wages commanded by Mesut Ozil at the club.

Liverpool have reportedly revived their interest in signing Lyon playmaker Nabil Fekir after missing out on his services during the 2018 summer transfer window.

Liverpool and Manchester City are understood to have made respective transfer bids to secure the services of Lyon playmaker Nabil Fekir.

Nabil Fekir has put the likes of Liverpool, Manchester United and Arsenal on high alert after it was revealed that the French attacker has been informed he can leave Lyon this summer. The talented international forward, who almost joined Liverpool just two summers ago, is amongst Europe's best up and coming talent.

Manchester United have reportedly earmarked Lyon forward Moussa Dembele as a potential target to bolster their strike force during the summer.

Liverpool are reportedly plotting a fresh attempt to sign Nabil Fekir from Lyon during this summer's transfer window.

Lyon forward Nabil Fekir, who has been constantly linked with a transfer move to Premier League giants Liverpool, has told reporters that he will soon reveal his decision. Fekir was asked if Liverpool would be his next home.

Bayern Munich crashed out of the UEFA Champions league this week, losing 3-1 to Liverpool at Allianz Arena. They have everything to battle it out in Bundesliga as they go toe to toe with Borussia Dortmund in the final stages of the league.

Everton are reportedly being linked with a surprise move to sign former Liverpool target Nabil Fekir from Lyon during the summer.

Lyon star Nabil Fekir has provided an update on his future, suggesting that he could be set to leave the Ligue 1 club for pastures new shortly. Fekir, who has been constantly linked with a move to Liverpool, has just 18 months remaining on his contract in France and has also caught the eye of Chelsea, Real Madrid and Bayern Munich recently.

Chelsea have reportedly stepped up their interest in signing Lyon midfielder Nabil Fekir with super-agent Pini Zahavi acting as the intermediary to push through the deal.

Lyon could part ways with Nabil Fekir in January

Lyon are reportedly prepared to sanction the sale of captain Nabil Fekir in the New Year after failing to finalise a new contract beyond June 2020.

Former Liverpool target Nabil Fekir will reportedly make a decision regarding his future when Lyon go into their mid-season break before Christmas.