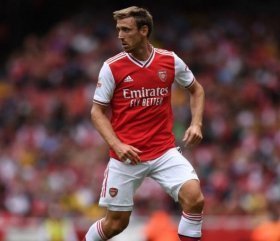 'I cannot continue': Former Arsenal defender Nacho Monreal announces retirement from football aged 36 after sustaining a knee injury that ruled him out last season... with Hector Bellerin and Jack Wilshire among those congratulating him on his career
Arsenal in 2013 for around £8.5million. During his time with the Premier League side - who won three FA Cups. During his career he also won
17/08 11:15

Arsenal have confirmed the permanent sale of Nacho Monreal to Real Sociedad. The Spain international had just 11 months remaining on his Gunners deal and the north London giants have sanctioned his departure for a nominal fee.

Arsenal will be aiming to bounce back from the recent defeat against Liverpool when they entertain Tottenham Hotspur at the Emirates Stadium on Sunday.

Arsenal cult hero Nacho Monreal is to depart the club this weekend, after the Gunners and Real Sociedad agreed a fee of around 250,000 euros for the player. Monreal, 33, had been in talks with the Spanish club for over a month and has decided that a return to his homeland at this stage of his career would be the best move.

Versatile defender Nacho Monreal could be set to depart Arsenal this summer, as Spanish club Real Sociedad begin talks to sign the 33-year-old player on a 4 million euro deal. Monreal is one of Arsenal's longest serving players and it is understood that the club want him to stay, but the defender is ready to return to his homeland.

Arsenal boss Unai Emery is prepared to sanction the sale of Nacho Monreal before the European transfer deadline, should the Spaniard request to part ways with the side.

Arsenal defender Nacho Monreal is reportedly on the verge of joining Real Sociedad after agreeing personal terms with the Spanish top-flight side.

Arsenal are reportedly prepared to sanction the surprise sale of Nacho Monreal to Real Sociedad before the transfer window closes in Spain.

Arsenal have the opportunity to maintain their perfect start to the Premier League campaign when they face Liverpool on the road on Saturday evening.

Mesut Ozil and Sead Kolasinac are set to miss Arsenal's league opener against Newcastle United with the police wanting to investigate further security incidents with the pair.

French duo Bordeaux and Rennes have reportedly open negotiations with Arsenal to secure the signature of wantaway defender Laurent Koscielny.