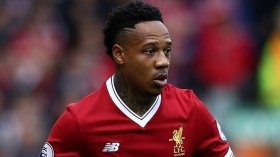 Nathaniel Clyne delighted penning new Crystal Palace deal
first-team between 2008-2012. He earned a move to the Premier League with Southampton in 2012 and made his England debut the following year
07/08 15:02

Liverpool are prepared to part ways with three first-team stars at the end of the current campaign.

Former Liverpool star Mark Lawrenson has urged the club to make an attempt to sign Reece James from Chelsea during the forthcoming transfer window.

Nathaniel Clyne is a target for Leicester City in the January transfer window, having fallen out of favour with Liverpool's coaching team during the past year. It is understood the right-back is ready to move for a fee of £5.5 million.

Liverpool will aim to continue their perfect start to the season when they entertain Chelsea in the third round of the League Cup on Wednesday night.

Liverpool could be without the services of Joe Gomez for at least a month after he picked up an ankle injury during England's international friendly against the Netherlands last week.

Liverpool manager Jurgen Klopp has said that three first-team players are doubtful to feature during this evening's Premier League fixture versus Newcastle United.

Liverpool are at Anfield for tomorrow's late Premier League kick-off versus Swansea City. The Reds settled for a 3-3 draw versus Arsenal in the previous outing, and Jurgen Klopp is likely to make a few changes to his lineup with a view to the weekend game versus Leicester City, who are in a better vein of form.

Atletico Madrid right-back Sime Vrsaljko has emerged as a potential target for Jurgen Klopp's Liverpool ahead of the winter transfer window.

Liverpool play host to Chelsea in Saturday's late kick-off at Anfield. The Merseysider come into the game on a three-match winning streak, and they are seeking their first league triumph over the Blues at Anfield since 2012.

Liverpool could be without the services of Nathaniel Clyne for up to three months after he underwent a minor operation on a back problem.

Liverpool will look to get their season back on track when they host Huddersfield Town at Anfield. The Reds suffered a 4-1 demolition at the hands of Tottenham Hotspur last weekend, and this has dropped them to ninth in the Premier League standings.

Jurgen Klopp's Liverpool will look to end their lean patch in the Premier League when they entertain Manchester United in Saturday's early kick-off from Anfield. The Reds have won just one league game in their last four attempts but there is every chance that they will turn up against United owing to their excellent record versus top-six opposition. The Merseyside giants have lost just a solitary game to the Premier League big-boys in 2017, and Klopp will hope for a positive result versus United - regardless of the hamstring injury sustained by Sadio Mane.

After a tumultuous start to the new season, Klopp will hope to gain some stability starting from Liverpool's mid-week clash with Spartak Moscow as he has Salah, Mane, Firmino, and Coutinho all available for the first time this season.

Southampton would prefer doing business with Chelsea for defender Virgil van Dijk rather than reviving their association with Liverpool.

Liverpool defender Nathaniel Clyne is a doubtful starter against Watford in the Premier League opener as he continues to recover from a hamstring and back injury.

Southampton defender Virgil van Dijk is reportedly keen on pushing a move to Liverpool before the end of the summer transfer window.

Manchester United and Manchester City to battle, not for a player, but for a scout

The two Manchester clubs will go head to head for the signature of former Tottenham head of recruitment, Paul Mitchell