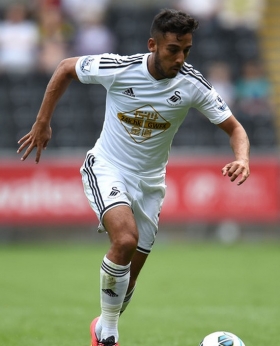 'Ready to throttle them!' the national media verdict on Aston Villa's draw with Burnley
standing a ball up for Rodriguez to attack. Rodriguez saw a first Premier League goal back with his hometown club, rising above Neil Taylor
29/09 07:24

Everton will seek to lodge a move for Tottenham Hotspur right-back Kieran Trippier during the summer transfer window.

Neil Taylor off to Sunderland?

Former Manchester United star Ryan Giggs is once again being linked with the managerial role at Swansea City. The Welshman was in the reckoning for the position last year before the Welsh outfit opted to recruit Francesco Guidolin.

Neil Taylor is inching closer to a contract extension at Swansea City.

Swansea City full-back Neil Taylor has emerged as a surprise target for Liverpool ahead of the summer transfer window.

Swansea City full back Neil Taylor is wanted by Tony Pulis' side West Bromwich Albion. The Baggies are ready to pay 4 million pounds to wrap up a deal for the left sided defender.

Crystal Palace are inching closer to sealing a deal for Senegalese defender Pape Souare, according to The Mirror.

Tottenham Hotspur defender Kyle Naughton will complete his transfer to Swansea City today having had a successful medical with the Welsh outfit.

Tottenham Hotspur have made a formal bid of around £8m to secure the services of Swansea defender Ben Davies during the upcoming transfer window.

Swansea City have apparently rejected a transfer offer from Fulham for the services of defender Neil Taylor during the winter transfer window.

Fulham manager Rene Meulensteen wants to add Welsh international full back Neil Taylor to his squad this week.The 24-year-old has seemingly decided to leave for a new challenge and his agent is already in talks with the Cottagers over a transfer move.

Fulham have reportedly made a bid worth £4m for the services of Welsh full-back Neil Taylor from Swansea during the winter transfer window, according to the Times.

Swansea City left-back Neil Taylor is expected to spend four to six weeks on the sidelines due to a thigh injury.