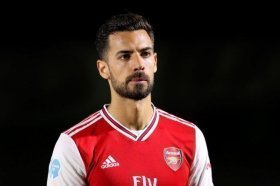 Chelsea news: Wilfried Zaha transfer being considered with £40m flop set for exit
for his Bakayoko's signature. Arsenal defender Pablo Mari recently joined the minnows on loan. Bakayoko's Chelsea contract could even be
30/08 00:21

Arsenal have officially confirmed the departure of Pablo Mari on loan to AC Monza.

Pablo Mari to move from Arsenal to Monza on loan

Arsenal defender Pablo Mari is on the verge of completing a loan move away from North London to join Italian side Monza. Pablo Mari has been told that he is no longer required at the Emirates Stadium, and the Spaniard will now move elsewhere in search of regular first team football.

Arsenal could be prepared to part ways with Gabriel Magalhaes if they receive a fee of around £43m this summer.

Arsenal defender William Saliba is looking forward to pre-season with the club following a successful loan stint at Marseille.

Arsenal are prepared to sanction the permanent exit of Hector Bellerin during this summer's transfer window.

Arsenal are set to part ways with Nicolas Pepe when the transfer window reopens this summer, The Sun reports.

Arsenal have their sights on Barcelona defender