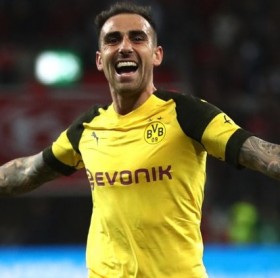 Manchester United in talks with Ernesto Valverde over interim manager's job
side, but Paco Alcacer, who scored in the reverse fixture at Old Trafford, was among the substitutes. Elsewhere, Mauricio Pochettino was
24/11 03:07

Liverpool are reportedly monitoring the performances of Villarreal winger Arnaut Danjuma ahead of a potential transfer.

Borussia Dortmund's on loan Spanish striker Paco Alcacer will extend his stay with the club and sign a permanent deal at the end of the season. Alcacer is currently with the Bundesliga giants on a temporary basis from parent club Barcelona.

Borussia Dortmund's on-loan forward Paco Alcacer has revealed that he would like to extend his spell in Germany. Alcacer is with Dortmund on a temporary basis after his parent club Barcelona allowed him to leave on loan last summer.

Leicester City are in the race to sign Paco Alcacer from Barcelona. The Spain international striker, 24 years of age, has been on the radar of the Foxes all summer and it is understood that Barcelona will accept a fee of around £35 million for Alcacer.

Everton are reportedly in the running alongside Southampton to secure the services of Barcelona striker Paco Alcacer this summer.

Barcelona are reportedly monitoring the proceedings of Manchester United defender Luke Shaw ahead of this summer's transfer window.