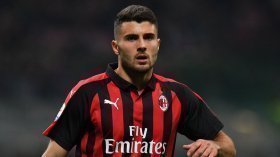 Cutrone departs Wolves to return to Serie A

Italian striker Patrick Cutrone’s Premier League adventure has come to an abrupt end, with the 22-year-old set to return to his homeland to join Fiorentina. Italian sports journal Corriere dello Sport has revealed that Cutrone, who is believed to have become frustrated at the lack of playing time granted to him by Wolverhampton Wanderers, will undergo a medical later today (Friday) before completing a move back to Serie A.

Manchester United midfielder Nemanja Matic could be heading for a January exit after spending just 24 minutes at the club's training ground on Wednesday.

Franck Kessie is linked with a move to Wolverhampton Wanderers, according to The Birmingham Mail. The Ivorian is playing his third season at AC Milan after his stint with another Serie A side Atalanta.

Wolves have completed a transfer move for Italian striker Patrick Cutrone from AC Milan in a deal worth a reported £22.5 million. The Italian burst on to the scene in Serie A in recent seasons scoring 13 goals in 63 games.

Wolverhampton Wanderers are reportedly on the cusp of signing Patrick Cutrone from AC Milan after agreeing on a deal worth £16m with the Serie A outfit.

Inter Milan striker Mauro Icardi has reportedly been emerged as a prime target for Chelsea as they seek to bolster their forward ranks during the winter transfer window.

Chelsea manager Maurizio Sarri is said to be frustrated with the performances of Alvaro Morata during the early part of the current campaign and he is likely to pursue a probable replacement at the turn of the year.