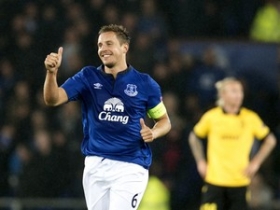 Ethan Ampadu or Phil Jagielka is Sheffield United's choice for key role against Leeds United
what had become a back four, and performed well in his first Premier League appearance since joining on a season-long loan from <...
25/09 11:45

Liverpool, Everton to battle it out for Diego Llorente?

Liverpool will reportedly go head-to-head with Merseyside rivals Everton in the race to sign Diego Llorente from Real Sociedad this summer.

Everton have reportedly opened a dialogue with Manchester United over the possible signing of Marcos Rojo in the forthcoming transfer window.

Everton are ready to complete a deal to sign 24-year-old Ivory Coast international defender Wilfried Kanon from ADO Den Haag of the Eredivisie. The Dutch club will sell the 6 foot 2 centre-back for a reported 7.9 million euros transfer fee.

Everton defender Phil Jagielka has signed a contract extension with the club that will see him stay with the Premier League side until 2019.

Everton in for AC Milan defender?

With Swansea City not kicking off their match against Everton until Saturday evening, they knew that a victory would life them above Hull City, who lost at home to Sunderland earlier in the day, and out of the Premier League relegation zone.

Everton are reportedly monitoring the performances of Hull City defender Harry Maguire ahead of a potential move for his services in the summer.

Ronald Koeman has confirmed that Burnley centre-half Michael Keane is a deadline day target for Everton. The 24-year-old has also been linked with Manchester City and Leicester City this month.

Sunderland are reported to have made contact with Phil Jagielka's agent in order to push through a move to Wearside before the transfer deadline.

Everton has reportedly approached AS Roma over the availability of defender Kostas Manolas. The Greece international is also being monitored by Manchester United and Arsenal.