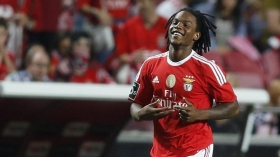 Ivory Coast international and Man City striker Wilfried Bony has made an emotional return to Swansea City, the club where he began his career in the Premier League. Bony arrives at the Swans having had a difficult loan spell with Swansea City last season.

Swansea City are on the cusp of completing a stunning loan transfer deal for Portugal international midfielder Renato Sanches. The Bayern Munich player will link up with Paul Clement's side for the duration of the 2017/18 campaign.

Liverpool manager Jurgen Klopp wants to move for Bayern Munich midfielder Renato Sanches should Philippe Coutinho make a transfer to Barcelona. Renato Sanches is currently out of favour at the Bavarian side.

Chelsea have ended their interest in signing Bayern Munich's Renato Sanches and will instead further their pursuit of Leicester City's central midfielder Danny Drinkwater.

Bayern Munich have reportedly turned down a mega-money offer for Renato Sanches from Italian giants AC Milan and are only looking for a loan deal for the Portuguese youngster.

The Bayern Munich CEO has confirmed interest from Chelsea for the Portuguese youngster during their pre-season tour of Singapore this week.

Chelsea to compete for Renato Sanches?

Chelsea have reportedly joined the pursuit of Bayern Munich midfielder Renato Sanches. The Portugal international is available on a temporary deal this summer after having failed to establish himself as a regular under Carlo Ancelotti last term.

Manchester United could lose out on Renato Sanches for the second summer running with AC Milan close to sealing a permanent deal with Bayern Munich.

Renato Sanches was tipped to become the next big star of European football last summer. After failing to impress during his debut season with Bayern Munich, it is now believed that the club are looking to offload him and have even reduced the amount of money that they are looking to get in return for him, which has alerted Manchester United.

Chelsea and Manchester United on high alert for Bayern duo

Premier League sides Manchester United and Chelsea are on high alert after Bundesliga champions Bayern Munich revealed that they are willing to listen to offers for Douglas Costa and Renato Sanches.

Serie A holders Juventus are planning to offer an escape route to Renato Sanches just a year after he signed for Bayern Munich.

Bayern Munich midfielder Arturo Vidal could well be on his way to Stamford Bridge after he liked an Instagram post linking him with the Premier League leaders.

Premier League leaders Chelsea are prepared to lodge a mega-offer to sign Bayern Munich star Arturo Vidal in the New Year.The Chile international joined the German champions from Juventus in the summer of 2015.

Renato Sanches has revealed that it was an easy decision to snub Manchester United once Bayern Munich came calling for his services. The teenager is regarded as one of the finest talents to come out of Portugal.