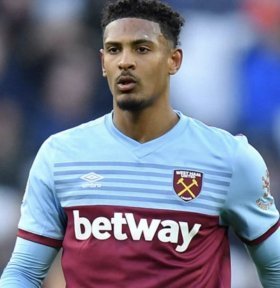 West Ham United and Wolverhampton Wanderers are among the clubs in the running to sign Real Madrid outcast Luka Jovic.

Arsenal have no desire to part ways with Eddie Nketiah amid the transfer interest from West Ham United.

West Ham are chasing the signing of Zambian international Patson Daka as a long-term replacement for Sebastien Haller. It is understood that the Red Bull Salzburg striker could be available for a fee of £23.5 million and is ready to leave Germany in favour of a move to the Premier League.

West Ham United have identified Eddie Nketiah as a potential candidate to bolster their strike force during the current transfer window.

Lyon striker Moussa Dembele has no desire to join West Ham United during the ongoing transfer window, a report from Goal.com claims.

Ivory Coast international striker Sebastien Haller has completed a surprise move from West Ham United to Dutch giants Ajax for a reported fee of £20 million. The burly forward had struggled to adapt to life in the Premier League and has been allowed to leave the East London outfit.

West Ham United have been offered the chance to sign Mariano Diaz from Real Madrid when the transfer window reopens in six weeks' time.

West Ham United have no plans of selling Declan Rice this summer amid the reported interest from London rivals Chelsea.

West Ham United and Tottenham Hotspur could reportedly compete for the services of Arkadiusz Milik from Napoli this summer.

West Ham United are reportedly leading the race to sign Michy Batshuayi from Chelsea during this summer's transfer window.

Rumours in Italy are that Tottenham Hotspur are looking at Torino’s Andrea Belotti as a potential summer signing and to provide some much needed cover for 22 goal England striker Harry Kane.