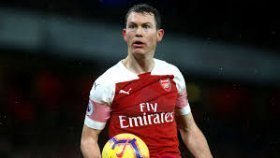 Arsenal manager Unai Emery has reportedly been in constant contact with Paris Saint-Germain defender Thomas Meunier regarding a potential move to the Emirates Stadium.

Arsenal take on London rivals Chelsea in the final of the Europa League on Wednesday night.The Gunners failed to secure a top-four finish in the Premier League earlier this month and they are now dependent on winning the midweek final in order to seal a Champions League berth next season.

Arsenal defender Stephan Lichtsteiner has confirmed that he could be parting ways with the club when the season comes to a conclusion.

Arsenal are scheduled to face Brighton & Hove Albion at the Emirates Stadium in their final home game of the campaign.

The father of Antonio Valencia has confirmed that Arsenal are among the clubs interested in signing the experienced defender when his contract with Manchester United expires in the summer.

Arsenal legend Pires has advised the Gunners to consider a move for Crystal Palace defender Aaron Wan-Bissaka when the transfer window reopens in the summer.

Arsenal can secure a fourth league win on the trot when they face north London rivals Tottenham Hotspur on the road this weekend.

Arsenal manage Unai Emery has said that he is hopeful regarding the recoveries of Alex Iwobi and Stephan Lichtsteiner ahead of the midweek Premier League clash against Bournemouth.

Arsenal manager Unai Emery has confirmed that Hector Bellerin has suffered a serious injury during the recent Premier League triumph over Chelsea.