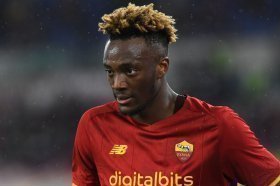 Celtic transfer news: Oh Hyeon-gyu finally given permission to sign for Bhoys, he’s travelling to Glasgow
... key here and Celtic will hope to have found another gem. In other news, Bellerin and Tammy Abraham wowed by Arsenal ace v Manchester United ...
23/01 07:30

Arsenal are weighing up the prospect of a loan transfer move for Tammy Abraham. The England international, currently playing for Serie A giants Roma, is an Arsenal fan and is ready to return to the Premier League once more, after spending 17 years with boyhood club Chelsea.

Arsenal could reportedly compete with Aston Villa to sign Roma striker Tammy Abraham at the end of the season.

Arsenal could make a fresh approach to sign former Chelsea striker Tammy Abraham next summer, according to 90min.

Roma striker Tammy Abraham has refused to rule out a possible return to Chelsea at the end of the campaign.

Chelsea defender Levi Colwill is attracting interest from three Serie A clubs, according to Calciomercato.

Chelsea can re-sign Serie A star for £67m

Chelsea have the option to re-sign Roma striker Tammy Abraham for £67 million at the end of the campaign.

England star has no regrets of leaving Chelsea

England international Tammy Abraham has said that he has no regrets of leaving Chelsea during the 2021 summer transfer window.

AS Roma manager Jose Mourinho is reportedly keen on luring Trevoh Chalobah from Chelsea during the January transfer window.

Arsenal have identified Manchester United forward Marcus Rashford as one of their leading targets for the summer.