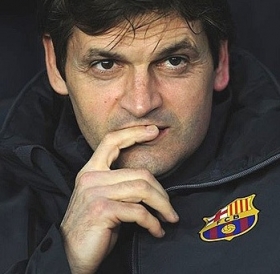 United offer created the rift between Guardiola and Tito

Pep Guardiola and Tito Vilanova are credited to be the architects of Barcelona dominance over the past 5 years.

Barcelona boss lashes out at Madrid over Bale fee

Martino insists that Cesc Fabregas must decide on his future

Barcelona midfielder scored twice in his club's 8-0 thrashing of Brazilian outfit Santos on Friday. Reports from ESPN suggest that the new Barca manager Gerardo Martino has asked Fabregas to remain at the Nou Camp.

Barcelona have agreed a new deal with Cristian Tello that will keep him at the club until at least 2018. The new contract signed has put an end to all speculations surrounding his future as his stay has been extended by another two years.

The newly appointed Barcelona manager Gerardo Martino has suggested that the Premier League champions Manchester United are wasting their time in attempting a possible move for their midfield star Cesc Fabregas.

The Argentinian coach Gerardo Martino has agreed a two-year contract with La Liga side. He signs for the Catalans as a replacement for Tito Vilanova who stepped down from his role due to his treatment against throat cancer.

Barcelona defender Gerard Pique have warned his former club Manchester United that they are just 'wasting their time' in trying to sign Spain midfielder Cesc Fabregas.

Gerardo Martino has emerged as the outstanding favorite to take over the managerial job at Barcelona this summer after Tito Vilanova stepped down after a relapse of his cancer.

Guus Hiddink has stepped down as the manager of Russian side Anzhi Makhachkala leading to speculation he could take over from Tito Vilanova at Barcelona.

Swansea City manager Michael Laudrup has ignored talk of a potential move to the Nou Camp to succeed Tito Vilanova, who today stepped down as manager of Barcelona. Laudrup is a legend at the Catalan side.

The Catalan giants manager Tito Vilanova has resigned from his post due persistent issues with his health. Vilanova replaced Barca's legendary figure Pep Guardiola as boss at the La Liga side last summer.

With Barcelona scheduling a press conference for later today, it is being hugely speculated that head coach Tito Vilanova could be stepping down from the coach role of the team.

French midfielder Mathieu Valbuena is wanted by Barcelona. The Marseille winger has emerged as Tito Vilanova's top priority for the upcoming transfer window as Barca look to add some new creative players to their squad for the new season.

Defender Thiago Silva's agent has told reporters that he wants to stay at PSG. The player joined the French club last year and still has four years left on his current contract in the French capital. Silva has no plans to quit PSG despite talk of a move to Barcelona.

The talented Spaniard starlet Alcantara is all set to leave the Catalan giants this summer after getting limited chances to impress under Tito Vilanova last term.Manchester United and Bayern Munich are expected to be the Spanish International's next destination.

Barcelona midfielder, Thiago Alcantara has been strongly linked with a move to the Old Trafford and the Spanish giants have asked the player to clear his decision within the next few days. The Catalans have reportedly drawn up a list of potential candidates to replace Thiago, should he leave the club.

The Madrid based newspaper, Marca, claims that Brazilian centre-back Thiago Silva is keen to leave Paris Saint-Germain in favour of joining the La Liga champions Barcelona.