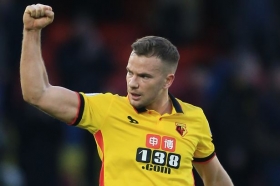 Tom Cleverley wants Watford to put together run of victories
a string of victories if they are to continue pushing for Premier League promotion this season. The Hornets currently sit sixth in the
11/01 15:35

Arsenal captain Granit Xhaka has said that the players were scared in the second half and that contributed towards the disappointing 2-2 draw against Watford at Vicarage Road.

Watford boss Marco Silva has ruled out any players leaving the club in the January transfer window, despite several names having been linked with an exit. The Hornets have been in rich form this season and impressive performances have caught the eye of numerous top clubs.

England international Tom Cleverley insists that Watford have the ability to secure three points against Chelsea following their recent comeback win versus Arsenal at Vicarage Road.

Midfielder Tom Cleverley has agreed a five year permanent deal to join Watford. The fan favourite has decided to dedicate his long term future to the club.

England international Tom Cleverley is just a game away from sealing a permanent move to Watford.

Everton have successfully completed the signing of midfielder Morgan Schneiderlin from Manchester United for an initial fee of £20m.

Everton midfielder Tom Cleverley is reportedly undergoing a series of medical tests ahead of his proposed loan switch to Watford.

Sunderland and Watford are battling for the signing of Everton midfielder Tom Cleverley. The England international central midfielder will be allowed to leave Goodison Park during the January transfer window.

Everton are reportedly prepared to cash in on the services of midfielder Tom Cleverley in the New Year. The England international has had limited playing time under Ronald Koeman this season.

Former Manchester United winger Luis Nani is the prime target for Everton ahead of the upcoming transfer window. The Portugal international has had a new lease of life since his move to Fenerbahce last year.

Everton have acquired the services of striker Leandro Rodriguez from Uruguayan side River Plate for an undisclosed fee.

James McCarthy has asked Everton to allow him leave the club during the upcoming transfer window.

Tom Cleverley has completed a surprise move from Man Utd to Everton on a free transfer. The England international had played on loan at Aston Villa last season.

England international Tom Cleverley will reportedly have a medical at Everton ahead of a Bosman move to the club.

England international Tom Cleverley will clinch a move to Everton, according to a report.

Everton in for Cleverley

Everton will look to beat Aston Villa to the signature of midfielder Tom Cleverley this summer.

Bundesliga outfit Wolfsburg will look to acquire the services of Tom Cleverley on a free transfer at the end of the season.

On loan Manchester United midfielder Tom Cleverley has hinted that he would like to stay at Villa Park. The player has impressed during his temporary spell.