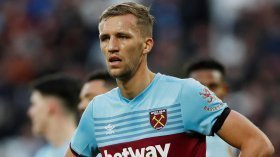 Tomas Soucek spotted walking around barefoot outside London Stadium leaving West Ham fans in hysterics
the top seven of the Premier League in the last two seasons. PLAY DREAM TEAM NOW FOR FREE WITH £100k IN PRIZE MONEY West Ham even made
28/07 11:53

Manchester United have the chance to sign Liverpool midfielder Alex Oxlade-Chamberlain for just £10m this summer.

'He is a real character': Mikel Arteta heaps praise on Arsenal attacker after West Ham draw

Barcelona vs. Slavia Prague live stream: How to watch Champions League games on the Web

Barcelona managed to beat Inter Milan 2-1 in the UEFA Champions League, although Inter entered the game with an advantage with respect to fitness. Slavia Prague is the next team to face the Blaugrana in the annual club football competition.