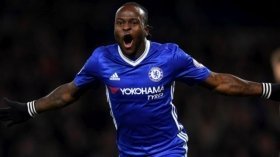 Chelsea winger Victor Moses has been loaned out to Spartak Moscow until the end of the campaign.

Chelsea are reportedly open to sanctioning the departure of Victor Moses to Inter Milan on a season-long loan.

Chelsea to offload 10 players this summer?

Chelsea are reportedly prepared to part ways with 10 first-team stars as they look to recoup funds for additional purchases this summer.

AS Roma are exploring the possibility of signing Chelsea wing-back Victor Moses, once his loan contract with Inter Milan expires this summer.

Chelsea have reportedly entered the race to sign Lautaro Martinez from Inter Milan during the summer transfer window.

Arsenal right-back Hector Bellerin has been linked with a possible move to Inter Milan when the transfer window reopens during the summer.

Chelsea are reportedly prepared to part ways with defender Marcos Alonso, should any club meet their £25m asking price in the summer.

Barcelona to swoop for Chelsea star this month?

Spanish giants Barcelona are reportedly weighing up a transfer approach for Olivier Giroud as they seek to overcome the injury absence of Luis Suarez upfront.

Serie A giants Inter Milan have confirmed that they have landed the signature of Victor Moses from Chelsea on loan with the option to buy at the end of the season.

Former Nigeria international Victor Moses appears set to return to Chelsea once his loan deal with Fenerbahce expires at the end of the season.

Fenerbahce are reportedly keen on securing the signature of Danny Drinkwater from Chelsea after previously luring Victor Moses from the west London side.

Chelsea have confirmed the departure of Victor Moses to Turkish side Fenebahce on a temporary basis for the next 18 months.

Chelsea winger Victor Moses is reportedly on the brink of joining Turkish giants Fenerbahce on loan for the rest of the ongoing campaign.

Victor Moses could reportedly be heading through the Chelsea exit door this month with Fenerbahce among the contenders to secure his signature.

Victor Moses is reportedly edging closer to leaving Chelsea with Crystal Palace leading the race to pursue him in a deal worth £12m.

Victor Moses' time at Chelsea may be coming to an end with Crystal Palace prepared to offer him an escape route when the transfer window reopens.

Chelsea winger Victor Moses is reportedly weighing up a fresh challenge away from Stamford Bridge after finding himself out-of-favour under Maurizio Sarri.

Former Nigeria international Victor Moses could push for a winter departure from Chelsea after falling out of contention under new manager Maurizio Sarri.

Chelsea defender Davide Zappacosta has talked up the possibility of joining Inter Milan when the transfer window reopens in the New Year.