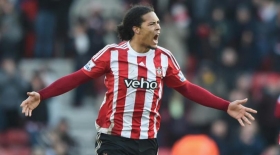 Nemanja Vidic vs Virgil van Dijk: Football fans vote Manchester United defender to lead the line
with Jurgen Klopp's side, and he's about to become a Premier League champion as well. If he can secure numerous titles at Anfield...
25/05 12:33

Newcastle United are reportedly regarded as the favourites to sign Kalidou Koulibaly ahead of Manchester United and Liverpool.

Serie A giants to sign Liverpool defender for £4.5m?

AS Roma are aiming to sign Liverpool defender Dejan Lovren on a cut-price deal during the summer transfer window.

Liverpool have earmarked Espanyol defender Leandro Cabrera as a potential replacement for Dejan Lovren during this summer's transfer window.

Liverpool are reportedly ahead of Manchester United and Real Madrid in the race to sign Kalidou Koulibaly at the end of the season.

Liverpool could reportedly listen to offers for both Joel Matip and Dejan Lovren when the transfer window reopens during the summer.

Liverpool are reportedly keen on partnering Virgil van Dijk with Kalidou Koulibaly, who has been tipped to leave Napoli at the end of the campaign.

Kalidou Koulibaly on his way to Manchester United?

Manchester United are reportedly prepared to make an offer of £74m in order to sign Kalidou Koulibaly from Napoli during the summer.

Real Madrid are reportedly considering a big-money move for Liverpool's Virgil van Dijk as they seek to strengthen their central defensive options.

Juventus are reportedly plotting a huge summer move for Liverpool defender Virgil van Dijk, according to The Sun.

AC Milan to return with fresh move for Liverpool star?

AC Milan are reportedly planning to retain their interest in signing defender Dejan Lovren when the transfer window reopens at the turn of the year.

Liverpool defender out for six weeks after fresh injury blow

Liverpool defender Joel Matip is set to be sidelined for around six weeks after suffering a fresh setback on the knee injury sustained earlier in the season.

Netherland captain van Dijk had his say against Racism on Twitter.

Liverpool snapped up Billy Koumetio from French club Orleans at the turn of the year after the Anfield club's backroom staff spotted the impressive young centre-back on a scouting mission. Koumetio, who is a powerful and very able defender currently playing for Liverpool's under-18 side, could go on to be one of the best defenders in the world.

Liverpool will be aiming to continue their perfect start to the Premier League season when they face Chelsea on the road on Sunday. The table-toppers go into the game with a seven-point advantage over the Blues.

Virgil Van Dijk has informed reporters that he has yet to sign a new contract at Liverpool, despite the Dutchman having been linked with a fresh deal for over 6 months. The star centre-back, who has been a revelation in the club's first team in recent months, has two and a half years remaining on his current deal.