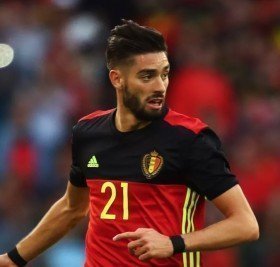 Atletico's Yannick Carrasco crashes Eden Hazard's interview and trolls him about La Liga title
that he is a coach with a lot of experience. Is Erling Haaland heading to Chelsea this summer? Find out more on The Football Terrace... "
03/06 20:27

The most exciting fixtures from the international break

The international break often divides opinion. With some supporters seeing their country play as a privilege, especially for the smaller nations, and others viewing it as often meaningless games that are a burden as they disrupt the domestic season.

Chelsea reportedly turned down the chance to sign Salomon Rondon from Dalian Professional before the transfer deadline at the end of January.

Atletico Madrid have reportedly reached an agreement with Belgian winger Yannick Carrasco, signing him on loan for the remainder of the season.

Arsenal have been handed with a potential boost in signing Yannick Carrasco with Dalian Yifang resigned to the fact that he wants to return to European football.

Arsenal have decided against making a renewed bid for Belgium international attacker Yannick Carrasco, having failed to agree transfer terms with the player's club. The Gunners have opted instead to make Wilfried Zaha their primary transfer target and are prepared to up their offer to £67.5 million to secure the Crystal Palace forward.

Arsenal have reportedly been told that they would have to spend around £25m to secure the signature of Celtic defender Kieran Tierney.

Belgium international attacker Yannick Carrasco, a long-term target for Premier League giants Arsenal, has hit out at current club Dalian Yinfang after the team decided to suspend the player. Carrasco was delayed in his return from international duty and missed a key game in the Chinese Super League.

Belgium head coach Roberto Martinez has said that he has no issues with Yannick Ferreira Carrasco remaining in the Chinese Super League.

Manchester United are back in the race to sign Belgian international winger Yannick Carrasco, according to a report from the player's homeland of Belgium. Carrasco, who currently plays in China, is said to be desperate for a move to the Premier League this summer.

Arsenal are considered favourites to secure the services of Suso from AC Milan with Monchi due to be appointed as the club's technical director in the next few weeks.

Arsenal are likely to make a fresh attempt to sign Yannick Carrasco from Dalian Yifang when the transfer window reopens at the end of the season.

Arsenal have reportedly ended their attempts to sign Ivan Perisic and Yannick Carrasco after failing to convince Inter Milan and Dalian Yifang respectively with their loan bids.

Arsenal are reportedly close to reaching an agreement to sign midfielder Denis Suarez from Barcelona. The Spain international is likely to be pursued on an initial loan deal with the obligation to buy at the end of the season.

Belgian football expert Kristof Terreur has said that Arsenal are unlikely to afford the signing of Yannick Ferreira Carrasco, who is desperate for a return to Europe this month.

Arsenal manager Unai Emery is prepared to sanction the sale of midfielder Mesut Ozil with the German having failed to adjust to his style of play.

Belgian winger Yannick Carrasco is reportedly prepared to take a pay cut in order to push through a move to Arsenal from Dalian Yifang this month.

Arsenal manager Unai Emery is weighing up a move for Belgium international attacking midfielder Yannick Carrasco in the January transfer window. The impressive 25-year-old - currently playing in China for Dalian Yifang - wants to leave Asia and return to Europe and it is understood the Premier League is his preferred destination.

Belgian winger Yannick Carrasco could be offered a return to Europe with Manchester United among the clubs weighing up an approach for his signature.