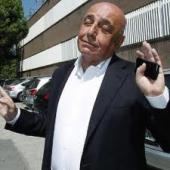 'He was sold to balance the books': AC Milan CEO Adriano Galliani reveals Zlatan Ibrahimovic 'did not want to leave' the club in 2012 following Swedish star's return to the San Siro
of Ibrahimovic on Friday with the 36-year-old completing a free transfer after the expiration of his LA Galaxy deal. The forward...
28/12 12:35

AC Milan in talks with Barcelona over Deulofeu transfer

AC Milan chief Adriano Galliani has revealed that his side are in discussions with Barcelona over a potential deal for winger Gerard Deulofeu in the summer.

AC Milan in negotiations over Deulofeu

AC Milan are still in negotiations with Everton over a proposed deal for Spanish winger Gerard Deulofeu.

AC Milan striker Alessandro Matri has agreed a season-long loan with Premier League side West Ham United, according to reports.

Italian giants AC Milan insist they have not received any bids from Premier League side Liverpool for their star striker Mario Balotelli.

AC Milan have made a final bid for Adel Taarabt. Harry Redknapp has told the midfielder that he can leave Queens Park Rangers but only if the club's £4 million valuation is matched.

Real Madrid shot-stopper Diego Lopez has reportedly agreed to join AC Milan on a four-year deal, according to a report.

Lopez to move to AC MIlan?

Real Madrid goalkeeper Diego Lopez has reportedly rejected his much speculative move to French club Monaco, and is now being heavily linked with Italian giants AC Milan, who are keen on signing the Spaniard.

AC Milan CEO Adriano Galliani has confirmed that Greek giants Olympiakos have made a bid for Brazilian striker Robinho. The forward is currently wanted by a host of other teams, but the Greek side seem to be closest to securing a deal.

Reports in Italian Media suggest that AC Milan are eyeing a move for Real Madrid defender Fabio Coentrao. The Portuguese has been heavily linked with a move away from the club.

The agent of misfit striker Mario Balotelli has told reporters that Jose Mourinho is interested in his client and is hopeful a deal to bring the Italian international to Stamford Bridge can be completed next summer.

AC Milan are set to make a bid for Barcelona midfielder Alex Song in the January transfer window. The Cameroon international has struggled to force his way into manager Gerardo Martino's first team plans and will seek a move away from the Nou Camp.

AC Milan vice president Adriano Galliani has revealed that Italy international Stephane El Sharaawy rejected a chance to leave the club in the summer and triple his wages.

AC Milan chief  Adriano Galliani has ruled out a move for Real Madrid midfielder Kaka amidst rumors that the Brazil international is set for a comeback to the San Siro.

AC Milan vice president Adriano Galliani has confirmed the Serie A side are still in the lookout for a new striker this summer as a cover for the indefinitely injured Giampaolo Pazzini.

AC Milan appear to have given up on a transfer seeing Japanese international Keisuke Honda making a move from CSKA Moscow to the San Siro. Despite the player heading into the last six months of his contract, the Russian outfit are demanding a massive 8 million Euros for Honda.

A week ago, what was thought to be a done deal has taken another blow as CSKA Moscow have rejected the latest proposal from AC Milan for star midfielder Keisuke Honda.

AC Milan are chasing Inter centre back Matias Silvestre, confirmed the club’s CEO Adriano Galliani. The Rossoneri chief has revealed that the two clubs are in the process of negotiating a fee for the defender.

Keisuke Honda heads back to Russia amidst Milan move talk

Keisuke Honda is heading back to Russia for training with CSKA Moscow. Honda has been in Japan this week and will now return to Moscow to discuss his long term future amidst talk of a move to Italy with AC Milan.