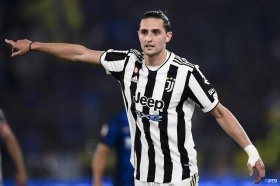 Arsenal: Edu expected to be keping tabs on possible Adrien Rabiot transfer
... level, Arsenal are in the market for a central midfielder, so I think Arsenal will be keeping tabs.” TIF Thoughts on Rabiot to Arsenal… A ...
04/12 17:45

Premier League sides Tottenham and Everton are monitoring the form of French international midfielder Adrien Rabiot, with Spurs said to be leading the race to sign the Juventus star. Rabiot has been playing in Serie A since 2019 and is looking for a transfer to England next summer.

Juventus midfielder Adrien Rabiot has said that he was lucky to avoid a move to the Premier League with Manchester United this summer.

Paul Pogba ruled out of World Cup this winter

Former Manchester United star Paul Pogba has been ruled out of the upcoming World Cup with France, according to his agent.

Hakim Ziyech is wanted by Aston Villa in the January transfer window, as the wantaway attacker seeks a move away from Stamford Bridge. Former Ajax attacker Ziyech is said to be ready to leave Chelsea for a fee of around £20 million, and it is hoped that the Morocco international will help bolster the Blues' attacking nous.

Chelsea could be prepared to swap Hakim Ziyech for Juventus midfielder Adrien Rabiot in January.

Arsenal and Manchester United are most likely candidates to sign Juventus midfielder Adrien Rabiot next year.

Manchester United are planning a late spending spree before the transfer window closes on September 1.

Real Madrid midfielder Casemiro is said to welcome a move to Manchester United before the transfer deadline.