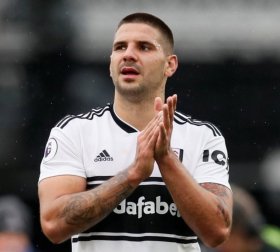 Aleksandar Mitrovic to miss Manchester United game, doubtful for World Cup
... at the World Cup . Mitrovic, 28, will miss this weekend's Premier League clash with Manchester United on Sunday at Craven Cottage. A foot ...
11/11 19:25

Chelsea have confirmed Graham Potter as their new head coach following the dismissal of Thomas Tuchel.

Fulham and Everton are both chasing the signature of Bamba Dieng, the Marseille forward who is likely to leave the Ligue 1 club this summer after being told he is no longer required in the first team. With Richarlison leaving the Toffees, and Dominic Calvert-Lewin injured, the club are desperate to find a new striker, as are Everton who are concerned that Aleksandar Mitrovic could run out of gas as the season wears on.

Striker Aleksandar Mitrovic has decided to stay with Fulham, despite the club being relegated to the Championship this upcoming season. The 24-year-old grabbed 11 Premier League goals as the Cottagers went down, leading many commentators to speculate that he would be headed for a new club this summer.

Chelsea are reportedly having a good look at Fulham striker Aleksandar Mitrovic, who has changed his fortunes since making the switch away from Newcastle United.

Manchester City were boasted as odds on favourites to lift the Premier League trophy again this season, and given their utter dominance in the league last term, it was an understandable assessment.

Tottenham Hotspur striker Harry Kane has praised his side after their 3-1 win over Fulham in the Premier League on Saturday.

Serbian striker on the cusp of Fulham transfer

Aleksandar Mitrovic is reportedly close to sealing his move to Fulham after being offered permission by Newcastle United to travel to the English capital.