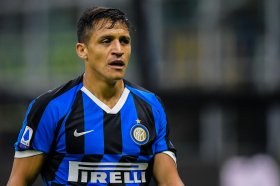 What Oleksandr Zinchenko did with fans as Arsenal record huge win over Man United in title race
... Arsenal vs Manchester United simulated to get a Premier League score prediction Alexis Sanchez makes it clear who he's supporting in Arsenal ...
23/01 16:32

Manchester United attacker Anthony Martial will return to the club this summer amid his unsuccessful loan spell at Sevilla.

Inter Milan are being fancied to sign Manchester United striker Edinson Cavani on a free transfer this summer.

Manchester United striker Edinson Cavani has emerged as a summer target for Inter Milan, according to Gazzetta dello Sport.

Arsenal manager Mikel Arteta has provided a fresh update on Alexandre Lacazette ahead of the Premier League clash against Crystal Palace.

Inter Milan have been credited with an interest in signing Arsenal striker Alexandre Lacazette in January.

Arsenal and Chelsea to compete for Inter striker?

Arsenal and Chelsea are among the clubs interested in landing the signature of Martin Satriano from Inter Milan this summer.

Inter Milan are weighing up a January move for Divock Origi, who has fallen down the pecking order at Liverpool.

Inter Milan manager Antonio Conte is keen on a reunion with Chelsea defender Marcos Alonso during the current transfer window.