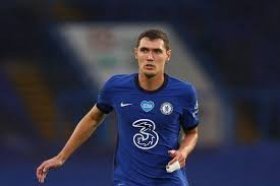 Fikayo Tomori's resurgence and glamorous life in Italy as he earns England call-up
Rudiger and Andreas Christensen. All three are now likely to leave Chelsea on a free transfer, and the Blues also have Thiago Silva in the
24/05 14:00

Chelsea have identified Jules Kounde and Josko Gvardiol as their main targets to bolster the central defensive department.

Chelsea defender Marcos Alonso is pushing for a return to the Spanish La Liga this summer, Mundo Deportivo reports.

Chelsea could get the chance to sign long-term target Kalidou Koulibaly during the upcoming transfer window.

Chelsea manager Thomas Tuchel has confirmed that Andreas Christensen will be leaving the club when his contract expires on June 30.

Chelsea defender Antonio Rudiger has insisted that the ongoing sanctions have not influenced his decision to leave the club.

Barcelona defender Sergino Dest has no plans of leaving the club this summer amid the reported interest from Chelsea.

Chelsea take on Liverpool in the FA Cup final at Wembley Stadium this evening. The Blues will be desperate to win the competition, having lost out in the final in the last two seasons.

Paris Saint-Germain are set to compete with Chelsea and Liverpool for Torino centre-back Bremer, L'Equipe claims.

Chelsea will be aiming to return to winning ways when they face Leeds United on the road tonight. The Blues have picked up just two points from the last three Premier League games.

Manchester United and Chelsea are set to compete for the signature of Villarreal defender Pau Torres this summer.

Chelsea have been offered the chance to sign Napoli defender and long-term target Kalidou Koulibaly.

Chelsea duo Marcos Alonso and Cesar Azpilicueta are intrigued over the prospect of joining Barcelona this summer.

Chelsea have deal in place for 23-year-old defender?

Chelsea trio return to training ahead of Everton trip

Chelsea have been handed a triple fitness boost ahead of Sunday's Premier League encounter against Everton on the road.