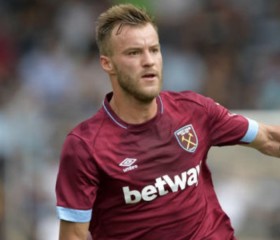 Andriy Yarmolenko bids West Ham farewell ahead of Al-Ain move
has penned a farewell message to West Ham fans as he prepares to join UAE side Al-Ain on a free transfer. Yarmolenko’s contract at the
13/07 14:56

West Ham United are reportedly looking into a loan move for Chelsea's Ruben Loftus-Cheek when the transfer window reopens in a couple of months.

West Ham United are deemed to have beaten the likes of Arsenal and Tottenham Hotspur in the race to sign Atlanta United playmaker Miguel Almiron in January.

West Ham has been dealt yet another blow after a terrible 1-0 defeat to Tottenham this past weekend, after hearing that striker Andriy Yarmolenko will be out of action for six months. The Ukrainian forward, who joined from Borussia Dortmund in a mega-money deal last summer, will be left on the sidelines for the foreseeable future after being stretchered off at half-time against Spurs on Saturday.

Former Arsenal midfielder Jack Wilshere has suffered a fresh injury blow with West Ham United after sustaining an ankle problem which has required an operation.

West Ham United have secured their seventh signing of the summer transfer window with Felipe Anderson arriving from Lazio on a club-record deal.

West Ham United are on course to secure their sixth signing of the summer transfer window with a deal for Lazio's Felipe Anderson close to completion.

West Ham United have confirmed their fifth capture of the summer transfer window with Andriy Yarmolenko having arrived from Borussia Dortmund on a four-year contract.