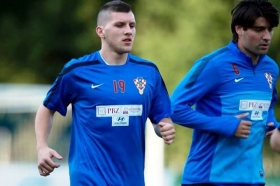 Chelsea have confirmed that Olivier Giroud has made the move to the Serie A with AC Milan.

Chelsea have reportedly been offered with the opportunity to land AC Milan striker Krzysztof Piatek on loan during the ongoing transfer window.

According to the Italian outlet SempreMilan, Sevilla are negotiating with AC Milan over the transfer of Spanish winger Suso.

Manchester United boss Jose Mourinho will reportedly urge the board to pursue one of Ivan Perisic or Ante Rebic when the transfer window reopens at the turn of the year.

Eintracht Frankfurt attacker Ante Rebic has said that he is happy big clubs and coaches are enquiring about him in the transfer window.

Manchester United have made contact with the representatives of Eintracht Frankfurt player Ante Rebic over a possible transfer to Old Trafford, according to the Daily Mail.