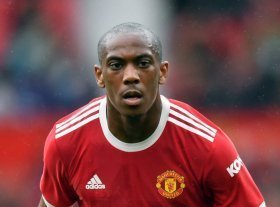 Louis van Gaal's Anthony Martial comments serve as a Cody Gakpo warning to Manchester United
... eventually see the best of the Netherlands youngster were he to move to Old Trafford. Perhaps Van Gaal's comments are a warning for United ...
27/11 06:30

Manchester United are ready to make a January bid to sign PSV Eindhoven star Cody Gakpo, according to The Sun.

Manchester United are expected to begin their search for a new striker as they prepare for Cristiano Ronaldo's exit.

Manchester United will be facing Fulham at Craven Cottage in today's Premier League encounter. The Red Devils can move within three points off the top four with a victory against Marco Silva's side.

Manchester United have no plans of pursuing Juventus striker Dusan Vlahovic at the end of the campaign, according to Florian Plettenberg.

Man Utd could be missing four attackers vs Aston Villa

Manchester United could be without four key attackers when they face Aston Villa on the road on Sunday.

Manchester United will be in Europa League action at Real Sociedad today. The Red Devils must win by a margin of two goals in order to finish top of Group E and avoid the round of 32 leg.