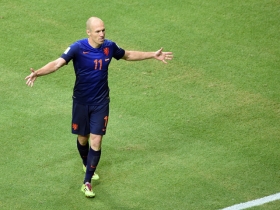 Manchester United are reportedly keeping a close eye on the progress of Villarreal and Nigerian winger Samuel Chukwueze.

Chelsea are reportedly to be eyeing a summer swoop for Villarreal winger Samuel Chukwueze as they seek to reinforce their options in the wide attacking department.

Chelsea manager Frank Lampard has heaped praise on Tammy Abraham following his match-winning impact against Crystal Palace over the weekend.

Villarreal winger Samuel Chukwueze is reportedly a target for Premier League side Bournemouth, with the Cherries' manager Eddie Howe sending his main scout to monitor the Nigerian international in action.  Chukwueze has caught the eye in La Liga since making his debut in 2018.

Bayern Munich and former France international Franck Ribery has found a new club after being released by the German champions, electing to move to Serie A and join the Viola. Fiorentina have signed Ribery on a two year contract.

Manchester City midfielder Leroy Sane looks set to leave the Premier League champions as the German international is reported to have agreed a deal with Bayern Munich. Sane, who found first-team opportunities less forthcoming last campaign, will reportedly move to the Bundesliga side in a 95 million euro transfer package.

Bayern Munich have reportedly emerged as fresh contenders to sign Crystal Palace winger Wilfried Zaha, who has been on the radar of Arsenal and Everton.

Bayern Munich to steal Belgian winger from the hands of Arsenal?

Bayern Munich have reportedly made a late attempt to beat Arsenal in the race to sign Yannick Ferreira Carrasco from Dalian Yifang.

Liverpool have reportedly decided against making a move for Nicolas Pepe with manager Jurgen Klopp content with the options at his disposal.