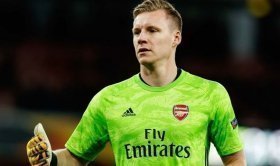 Leicester City will complete a transfer for goalkeeper Alex Smithies this afternoon, with the 32-year-old signing a three year deal at the King Power Stadium. Smithies has been with Cardiff City since 2018 and has played 90 times, and will play as a backup keeper for Brendan Rodgers' side.

Arsenal flop on his way to Fulham?

Former Arsenal and Chelsea winger Willian could make a swift return to the Premier League with Fulham this summer.

Arsenal to receive just £3m up front for Bernd Leno

Arsenal will receive just £3m up front from Fulham for the purchase of goalkeeper Bernd Leno, The Athletic's David Ornstein claims.

Arsenal have reached an agreement with Fulham for the sale of goalkeeper Bernd Leno, The Athletic report.

Arsenal have reached an agreement with Fulham for the sale of goalkeeper Bernd Leno this summer.

In a surprise turn of events, Kasper Schmeichel is set for a transfer away from Leicester City. The Danish international goalkeeper will move to Nice in Ligue 1 after a successful spell with the Foxes that brought Premier League and FA Cup success.

Arsenal star on the verge of joining London club

Arsenal goalkeeper Bernd Leno is reportedly on the verge of joining Fulham, who were recently promoted to the Premier League.

German international goalkeeper Bernd Leno has a host of offers from which to choose his next destination, as the Arsenal keeper heads for the Emirates Stadium exit door. The former Bayer Leverkusen shot stopper had been expected to join London rivals Fulham, but the Cottagers were unwilling to meet Arsenal's valuation of £12 million.

Arsenal are readying a move for Barcelona goalkeeper Neto, according to a report from Spain. The Gunners have already signed Matt Turner, and are looking to sell Bernd Leno this summer, but it appears manager Mikel Arteta wants to bring in another shot stopper as further backup for the new season.

Arsenal have confirmed their third signing of the summer transfer window with the arrival of goalkeeper Matt Turner from New England Revolution.