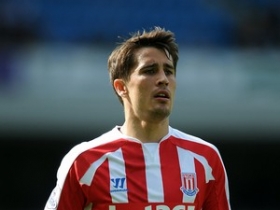 Stoke City have decided to allow out of favour Spanish forward Bojan to join La Liga forward Malaga. The former Barcelona man has slipped down the pecking order at the club since the arrival of Jese.

Girona, who will be playing in the La Liga for the first time in their history next season, want to sign ex-Barcelona players Bojan Krkic and Munir El Haddadi.

Middlesbrough are reportedly deemed favourites to sign Stoke City ace Bojan Krkic in the January transfer window. Boro have the player as their number one target as they head to the final stages of the transfer window.

Premier League giants Manchester United, Liverpool and Chelsea will reportedly battle it out for the services of ex-Barcelona midfielder Bojan Krkic.

Stoke City in for Adama Traore

Stoke City want to add winger Adama Traore to their squad before the transfer window closes. Traore has been told that he can leave Barcelona on a temporary basis.

Stoke City have been dealt a major blow as star striker Bojan Krkic has been forced out of action for the remainder of the season after sustaining a serious injury.

Stoke City have signed striker Bojan Krkic from Barcelona on a four-year deal for an undisclosed fee.

Reports from Spain suggest that Stoke City have won the race to sign Bojan Krkic from Barcelona on a season long loan deal. The 23-year-old, formerly of AS Roma, is not a part of Nou Camp manager Luis Enrique's long term plans.

Liverpool are understood to be readying a summer offer for Barcelona striker Bojan Krkic, according to The Mirror.

Barcelona Loan Bojan To Ajax On A One Year Deal

Barcelona has confirmed loaning out their forward Bojan Krkic to Eredivisie club Ajax on a one year deal. The Spanish club have officially announced this deal on their club website.

Frank de Boer admits that Ajax are very keen on landing the Barcelona forward Bojan Krkic this summer. Boer is hoping to bolster up his attacking front by signing the 22-year-old.

Bojan Krkic happy at AS Roma

Spanish striker Bojan Krkic insists that he made the right move to join AS Roma last summer, and is happy to stay in Italy for the time being.

Spanish whizzkid Bojan Krkic has finally agreed a move from Barcelona to Roma, in a package worth 12m EUR. Krkic had been told by Pep Guardiola that he was free to leave the Nou Camp, has opted to continue his football development in Italy.

Barcelona's young midfield dynamo Oriol Romeu will complete a move to Chelsea on Monday, putting pen to paper on a five year contract with the Blues in a deal worth approximately £6m for Barca.

Bojan Krkic not yet a Roma player

After Bojan Krkic helped Spain's under-21 side lift the European Championship yesterday, the player admitted he is still a Barcelona player and that talks with Roma are still ongoing.

Bojan Krkic looks set to quit Barcelona, with Roma his next destination in a deal worth around 11m GBP. The highly rated 20 year old striker has found first-team opportunities limited at the Nou Camp.