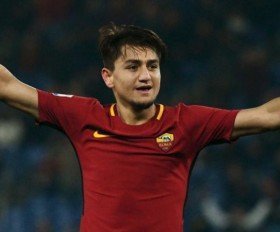 Marseille announce Cengiz Under transfer with bizarre retro video - Turkish Football
were to use their buy option. Under spent last season on loan at Leicester City who also had a buy option but opted against using it after
05/07 16:39

Arsenal are interested in signing Roma winger Cengiz Under during this summer's transfer window.

Leicester City have secured the signing of Wesley Fofana from French outfit Saint Etienne. The player has put pen to paper on a five year deal with the Foxes, and arrives at his new club for a transfer fee of near to £18.75 million.

Manchester United have reportedly joined Everton in the race to sign Cengiz Under from AS Roma during this summer's transfer window.

According to The Sun, Everton have entered the transfer race for Roma winger Cengiz Under, who has also been tracked by Arsenal and Tottenham.

Arsenal have reportedly earmarked Roma winger Cengiz Under as their prime target when the transfer window reopens at the end of the campaign.

Arsenal are reportedly on the cusp of signing Monchi as their first-ever technical director following his departure from AS Roma earlier in the week.

Premier League giants Chelsea are reportedly looking into a move for Roma's Cengiz Under as they seek to replace Eden Hazard at the end of the season.

Arsenal give up on signing Serie A winger this month

Arsenal have reportedly ended their interest in signing Roma attacker Cengiz Under after being outpriced in their bid to sign the Turk.

Arsenal are understood to have made a formal approach to sign Cengiz Under from AS Roma during the forthcoming winter transfer window.

Arsenal are reportedly prepared to sanction a £44.5m move for Cengiz Under after watching the Turk closely in action during Roma's league encounter against Inter Milan last night.

Arsenal, Man Utd or Barcelona will have to splash out €50m for in-demand attacking starlet

With Arsenal, Man Utd, Man City and Barcelona all paired with an interest, Roma have reportedly set their asking price for Cengiz Under.

Arsenal Linked To A Move For £52m Attacking Ace: Should Emery Go For It?

Arsenal had a productive summer with some shrewd and effective transfer business but are rumoured to splash the cash in winter to acquire Cengiz Under, the 21-year-old AS Roma winger who is valued at £52m and also being monitored by Bayern Munich as per reports.

Cengiz Under wanted by Bayern Munich

Roma's impressive forward Cengiz Under is a target for Bayern Munich. The player has caught the eye with some impressive displays and now Under's agent has revealed that contact has been made by Bayern Munich in recent times.