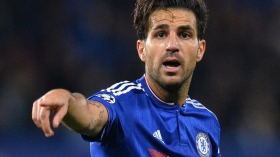 Cesc Fabregas admits trying to encourage Barcelona to sign Aurelien Tchouameni
came through the academy at Barcelona and also enjoyed spells with Arsenal and Chelsea , has since joined Italian Serie B side Como,
05/08 17:46

Barcelona legend was "tempted" to go to Arsenal

The former football agent of Barcelona superstar Lionel Messi, Fabian Soldini claims that the Arsenal transfer was very possible. Lionel Messi was “tempted to go to Arsenal” back in the summer of 2003 as the Gunners were expressing interest when luring Cesc Fabregas away from La Masia.

The Wijnaldum-Thiago Debate at Barcelona

Barcelona is trying to start the squad renewal, or so, for the next season. The latest debate amongst the Board of Directors, the Catalonian sports media, and the fans: who to sign for the midfield, whether Georginio Wijnaldum or Thiago Alcántara. Who did Koeman ask for? Wijnaldum.

Chelsea have reportedly decided against pursuing a midfielder to replace the departed Cesc Fabregas before the transfer window slams shut tonight.

Chelsea have reportedly suffered a transfer blow with Inter Milan beating them to the signature of Nicolo Barella in the ongoing transfer window.

Monaco have reportedly registered an interest in securing the signature of midfielder Marouane Fellaini, who has been deemed surplus to requirements at Manchester United.

Atletico Madrid are reportedly close to securing the signature of Alvaro Morata from Chelsea during the ongoing transfer window.

Zenit St Petersburg have reportedly told Chelsea to part with a sum of around £36m in order to secure the signature of Leandro Paredes this month.

Argentine midfielder Leandro Paredes could be on the cusp of joining Chelsea this month after dropping a huge transfer hint through his official Twitter account.