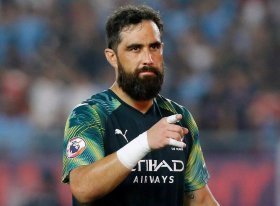 Alexis Sanchez 'ponders' what could have been if he'd chosen Man City over Manchester United
did playing football on it. “If Claudio Bravo brings that Premier League winner’s medal with him again the next time we’re on international
22/01 10:00

Barcelona are unlikely to consider any offers for Marc-Andre ter Stegen amid the reported interest from Premier League side Chelsea.

Manchester City are reportedly looking at a surprise emergency loan move for Keylor Navas with Claudio Bravo expected to be sidelined for the long-term.

Arsenal could make a shock attempt to sign Barcelona goalkeeper Marc-Andre ter Stegen at the end of the current campaign.

In a record breaking transfer window, Manchester City have had no hesitation when it has come to reinforcing their squad with Pep Guardiola setting high expectations for the season ahead, in both domestic and European competition. Having already spent £120 million on defenders this summer, the Spanish manager has said that the club will now try to sign a new centre back.

Manchester City have had an opening bid rebuffed for Napoli goalkeeper Pepe Reina. The former Liverpool ace has just 12 months left on his Naples contract.

No room for failure: Guardiola expects success after summer spending

An underwhelming start to his career as manager of Manchester City saw Pep Guardiola's reign fail to produce a Premier League title challenge and an early elimination from the Champions League. Following this summer’s spending, Guardiola will be looking to his new players to perform. There will be little room for disappointment this season.

West Ham United and Manchester City are expected to reach an agreement this weekend that will see England goalkeeper Joe Hart join The Hammers on an initial loan deal, with the view to making it a permanent deal.

England international Joe Hart will not take part in Manchester City's pre-season tour of the United States as he looks to push for a move elsewhere this summer.

Chile international and Manchester City goalkeeper Claudio Bravo is keen on working alongside his compatriot Alexis Sanchez at the Etihad next season. The 28-year-old has less than a year left on his current Arsenal contract.

Former Manchester City goalkeeper Willy Caballero has undergone a successful medical with Chelsea ahead of his proposed move to west London.

Manchester City goalkeeper Joe Hart is reportedly angling towards a move to West Ham United as he looks into his England future.

After a season of goalkeeping dramas, Manchester City have confirmed the signing of Benfica stopper Ederson Moraes for a fee of £35 million. Benfica announced that an agreement had been reached last Thursday, but with some of the fee going to third parties, it was not made official until the Premier League announced that they were happy with the deal until today.